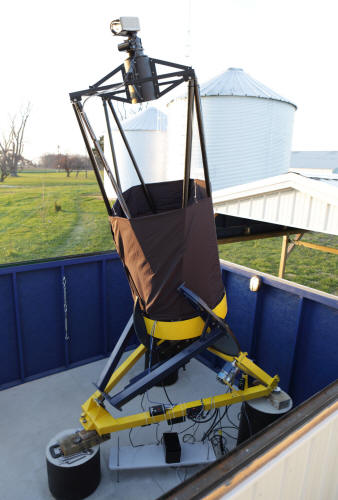 The original telescope was built in the late 1980s has not been used for over a decade due to a lightning strike that took out all the electronics including the CCD camera.  This telescope is now fully automated and in service at ARO.  The telescope optical design is a prime focus f/3.0 employing a STX-16803 as the primary imaging device provided by the Planetary Society Gene Shoemaker grant.  The field of view in this configuration is 45.6 x 45.6 minutes.  This telescope is a twin to the Katzman Automatic Imaging Telescope (KAIT) and was originally used by Saul Perlmutter in his research for the "discovery of the accelerating expansion of the universe through observations of distant supernovae" in 2011.

The telescope is housed in a low-cost roll-off roof observatory that will allow access to the entire sky without the additional complication of a synchronized dome.

The original optics have been replaced with a Lockwood Custom Optics 30 inch f/3.0 mirror and the configuration is now a wide field prime focus telescope.  A new mirror cell was constructed and virtually the only components that remain original is the basic telescope mount and mirror box.

Back to the Observatory Directory Page